Phil Fersht, CEO at HFS Research, who introduced the term RPA in 2012, recently shared this new manifesto for RPA in which, one of the points he makes is to “consider dropping the word Robotics from RPA when all RPA does is to automate tasks”. We too believe, that the term, which has been used to market RPA, creates confusion. In practice, RPA only justifies a third of what is meant by Robotics.

A good reference point is the article  Software Robotics = AI + Data Sciences + RPA, which gives mention to the IEEE definition of Robotics, and explains how a Robot must have “Sense, Compute, and Act” as three key components and that RPA in its current UI automation form only equates to the “Act” part of Robotics in the context of Software Robotics.

Gartner, in their very first Magic Quadrant report on RPA, stated that ‘UI automation integration features in RPA do not have the capabilities to adapt as how a human would and thus these automations are not equivalent to be classed as Robots.’ Unless you combine Sensing and Computing capabilities to such scripted automations, they cannot be Software Robots. But, by combining AI and Analytics capabilities, an RPA automation can be transformed into fuller Software Robotics or true Digital Workforce.

Referring back to the automation technologies from An Introduction To The Automation Landscape And 2020 Trends, these can be aligned to the four automation categories. Task, Process, Value and Knowledge-based Automation, as in the below diagram, by having to create this innovation quadrant with the degree of technology innovation on one axis and the degree of process transformation on the other. 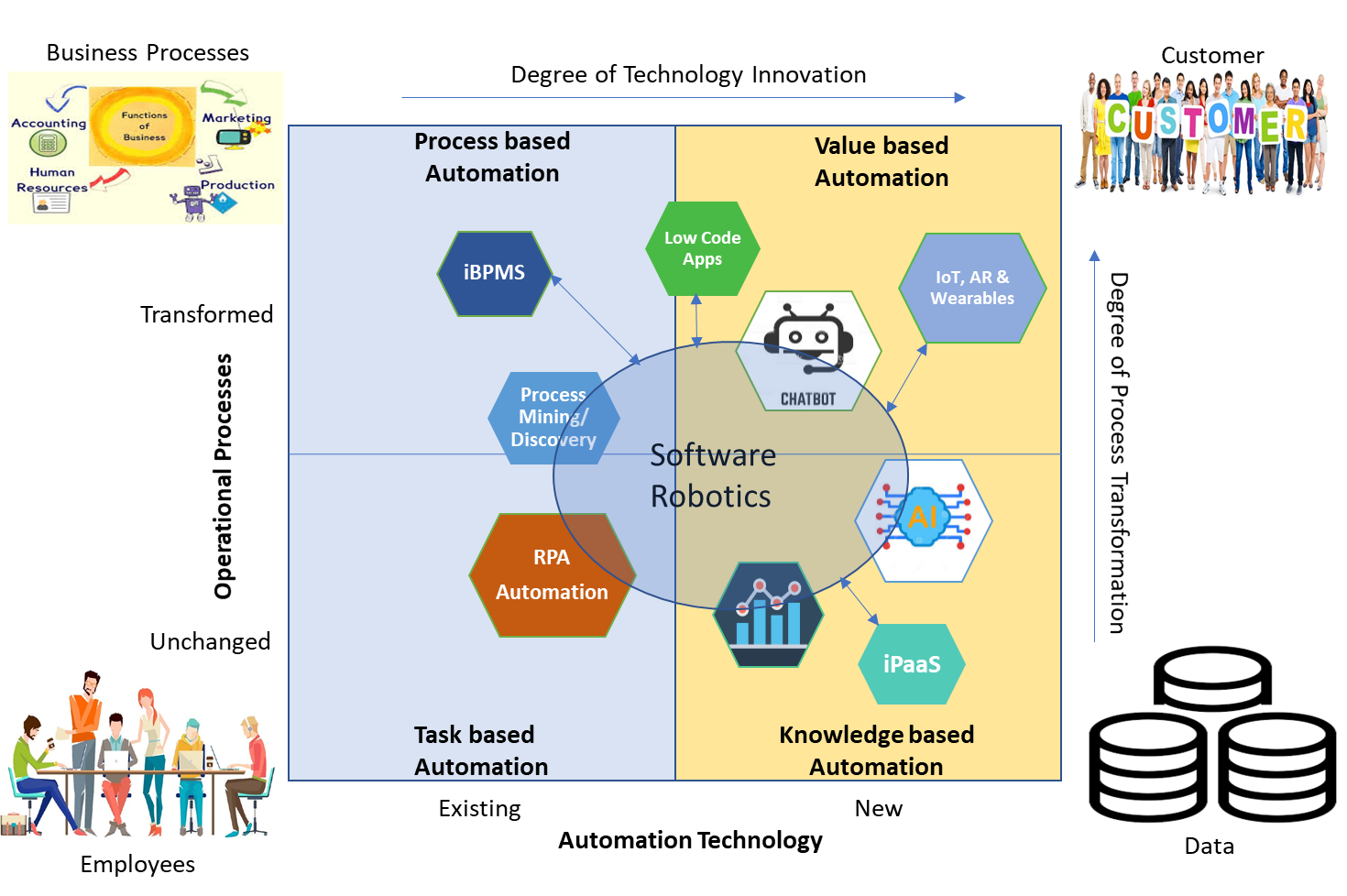 Software Robotics as an Architectural Innovation

More importantly, the third level of innovation, i.e. Architectural Innovation occurs when new ways are realised to combine existing technologies and components. Software Robotics is a good example of how a number of these automation technologies can be combined in a specialised way to provide for the “Sense, Compute, and Act” capabilities in a Software Robot. A Software robot that can-

1) Perform real-time personalised interactions with a human through chat or voice channels (Sense),

2) Analyse user inputs to determine optimal processing actions to be performed, handle exceptions, self-correct and maintain the state of interactions (Compute), and

Additionally, the software robot provides touchpoints to integrate with other automation technologies such as iBPMS to allow execution triggers from within an e2e process orchestration, iPaaS to execute automation steps via API façade’s or as asynchronous events through an ESB, or for triggering interactions with the robot via Physical Devices (Wearables, IoT) or Apps.