During performance testing, monitoring your operating system is important to potentially uncover any bottlenecks. Refer to our article  A High-Level Insight Into Performance Monitoring with regards to server monitoring,

Below we will explore the most common methods to monitor the three types of operating systems that are normally hosted on servers i.e.

When it comes to monitoring windows servers, Perfmon (Performance Monitor) is by far the easiest way to collect metrics.

You can run Perfmon on any Windows machine by clicking Start -> Run -> “perfmon”.

Some performance testing tools will provide an interface to remotely monitor perfmon from the interface. This removes the need for separate retrieval and collation of Perfmon log files when analysing the test results

The typical counters that you can collect from perfmon are; 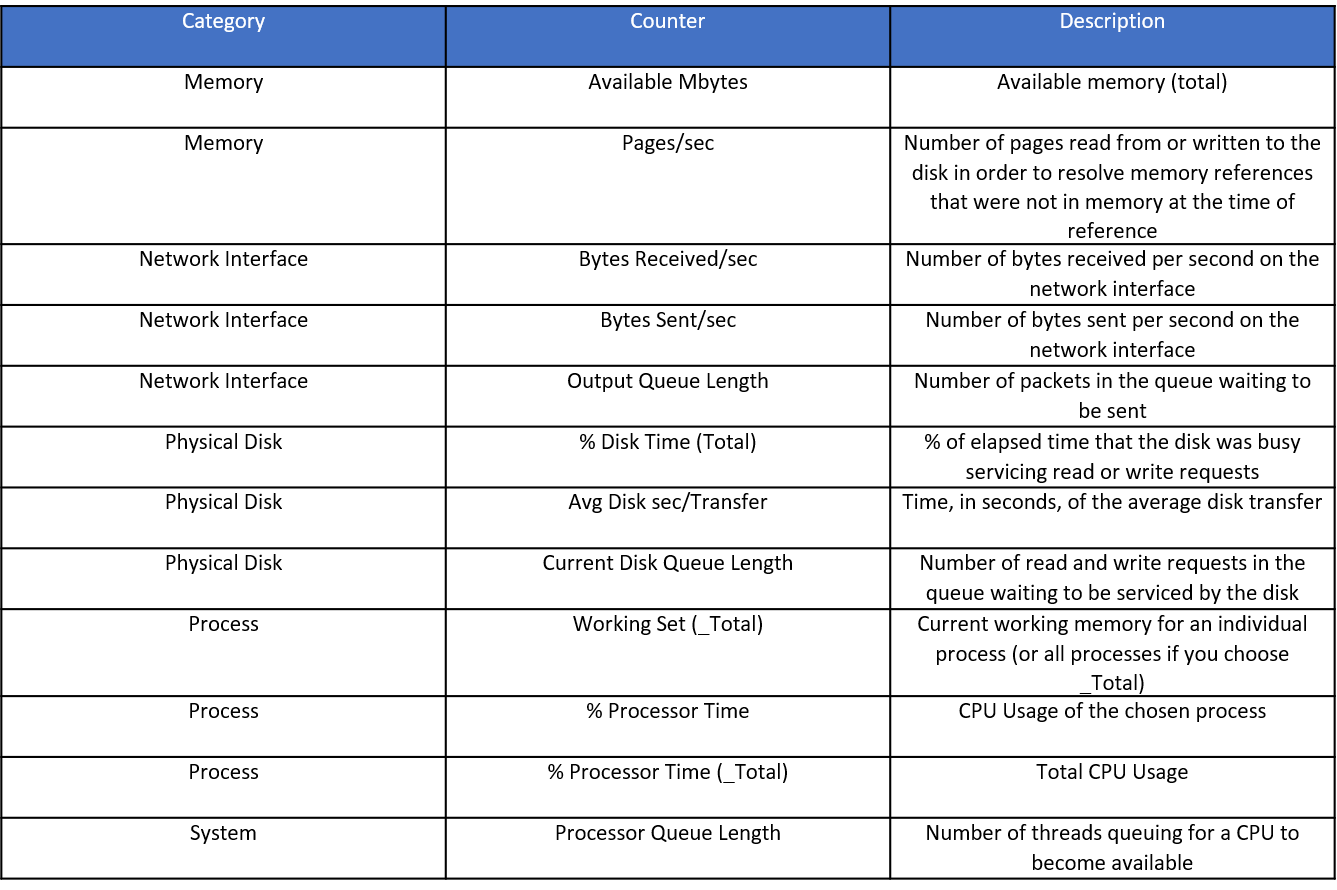 The majority of Unix and Linux have the same performance monitoring interfaces, with some minor variations.

In Unix, a daemon is a computer program that runs as a background process, rather than being under the direct control of an interactive user. Typically daemon names end with the letter ‘d’ for example, syslogd is the daemon that implements the system logging facility and sshd is a daemon that services incoming SSH connections.

Here are some of the commands that can be useful in performing the monitoring on these servers.

In LoadRunner (MicroFocus’s Performance Testing tool) this is referred to as the “Unix System Monitor”. It works along the same lines as perfmon: a daemon runs on the remote machine that you need to monitor. You can then use a client to connect to it and retrieve the data. The LoadRunner Controller does exactly this.

For more information click on the following link. https://www.ibm.com/support/knowledgecenter/ssw_aix_72/r_commands/rstatd.html

iostat (Input/Output statistics) are used to monitor system input/output devices (physical and logical) that are loaded, by observing the time the devices are active in relation to their average transfer rates.

iostat produces two reports, one on CPU utilisation and one on Disk use and the combined count of characters read/written to/from all terminals on the system.

iostat’s options default to tdc (terminal, disk and CPU). If any other option/s are specified, this default is overridden i.e iostat – d will only report statistics about disks.

An iostat command of simply “iostat” will produce a single line of values printed out on the terminal window.

The above report is broken down into two parts.

%steal – shows the percentage of time spent in involuntary wait by the virtual CPU or CPU’s while the hypervisor was servicing another virtual processor.

Device – This column gives the device (or partition) name as listed in the /dev directory.

Blk_read/s (kB_read/s, MB_read/s) – Indicates the amount of data read from the device expressed in a number of blocks (kilobytes, megabytes) per second. Blocks are equivalent to sectors and therefore have a size of 512 bytes.

Blk_wrtn/s (kB_wrtn/s, MB_wrtn/s) – Indicate the amount of data written to the device expressed in a number of blocks (kilobytes, megabytes) per second.

To produce a report over a specified duration of time the arguments, interval and count will need to be added.

iostat is the type of monitoring

5 (seconds) is the frequency (interval) the stats are captured

> is the command to direct the output

tmp/io_0620_1200.txt is the directory and file where the output will be captured.

This command will produce output for a 45 minute period, with the first line containing statistics for average values since the system reboot; subsequent lines will be relevant to the system’s behaviour for the snapshot in time that the data is collected.

iostat report statistics are useful in determining how heavy and evenly the load on the system is distributed across all physical drives, as well as CPU utilisation. These stats can be very useful when determining whether a physical volume is becoming a performance bottleneck and if there is potential to improve the situation.

For more information click on the following link https://man7.org/linux/man-pages/man1/iostat.1.html

When you type vmstat into your command line, you will see a screen similar to the one shown below:

vmstat is the type of monitoring

Option – lets you specify the type of information needed such as paging -p, cache -c, interrupt -i etc. If no option is specified information about process, memory, paging, disk, interrupts & CPU is displayed.

Delay – is time period in seconds between two samples. vmstat 2 will give data at each 2-second interval.

Count – is the number of times the data is needed. vmstat 4 5 will give data at 4-second intervals 5 times.

For more information click on the following link https://man7.org/linux/man-pages/man8/vmstat.8.html

prstat (process statistics) is the most common utility found on Sun Solaris for performance monitoring.

The prstat command examines all active processes on the system and reports statistics based on the selected output mode and sort order.

When you simply type prstat in your command line, you will see a screen similar to the one shown below, refreshing every few seconds and sorting all the information by the CPU column:

The following list defines the column headings and the meanings of the above prstat report:

PID– The process ID of the process.

SIZE (SWAP) –  The total virtual memory size of the process, including all mapped files and devices, in kilobytes (K), megabytes (M), or gigabytes (G).

RSS – The resident set size of the process (RSS), in kilobytes (K), megabytes (M), or gigabytes (G). The RSS value is an estimate provided by proc(4) that might underestimate the actual resident set size. Users who want to get more accurate usage information for capacity planning should use the -x option to pmap(1) instead.

STATE  The state of the process:

TIME – The cumulative execution time for the process.

CPU – The percentage of recent CPU time used by the process. If executing in a non-global zone and the pools facility is active, the percentage will be that of the processors in the processor set in use by the pool to which the zone is bound.

NLWP – The number of lwps (lightweight processes) in the process.

If you run prstat with the -a option (prstat -a) you will get an output similar to the default one, but the last few lines of it will be used for providing a really useful report of the users consuming top system resources.

Option – If you do not  specify  an  option,  prstat  examines  all processes and reports statistics sorted by CPU usage.”

Delay – is time period in seconds between two samples. prstat 2 will give data at each two-second interval.

Count – is the number of times the data is needed. prstat 2 5 will give data at 2-second intervals 5 times.

Other operating systems you may run into are OpenVMS and IBM Mainframes. Mainframes come in two different flavours:

For OpenVMS, HP provide the OpenView Performance Agent and a reference of all performance counters here: http://h30266.www3.hpe.com/odl/axplp/sysman/ovpa4040/openvms_metrics.html

Whether you are to monitor OpenVMS or a mainframe, you are likely to be working hand-in-hand with the system administrators, who may have other monitoring solutions in place.

In summary, there are numerous methods to monitor operating systems while performance testing.

To find out how SQA Consulting can assist you with your performance monitoring needs contact us.