THE SCALE OF GLOBAL SHIPPING

The international shipping industry transports nearly 90% of global trade. A map of global shipping routes shows how goods, be they coal, iron ore, grain, oil or woven baskets, flow around the world like the lifeblood of the planet. Before the impact of the coronavirus pandemic, there were over 50,000 merchant ships trading internationally, registered in over 150 nations, and manned by over a million mariners of virtually every nationality. What many industries will look like post-coronavirus is unknown, but the world will still need goods to move from A to B.

For all this to happen, the ships need to be designed, built, docked, crewed, maintained and insured, and the deals will likely need financing with guarantees, letters of credit or various other financial products.

A slew of individuals and businesses come together to generate trillions of dollars of trade and naturally, this provides opportunity and incentives for those practising the dark arts. As well as keeping an eye out for fraudsters and money launderers, banks and other financial institutions (FIs) need to consider the ever-increasing sanctions that are imposed on some of the countries involved in importing and exporting and also on the vessels carrying the goods.

In the last year, the Trump administration has used new sanctions on dozens of vessels to target oil supplies to or from both Venezuela and Iran and this has contributed to some significant increases in the overall numbers of sanctioned vessels. The chart below shows how the total number of OFAC sanctioned vessel names went from 265 in December 2015 down to 77 in December 2017 (with Obama’s lifting of the Iran sanctions) and back up to a huge 547 vessel names by November 2019. 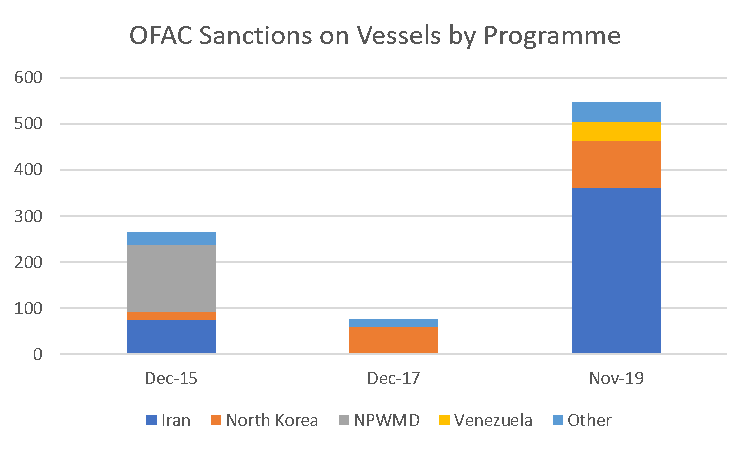 All this means that banks and other businesses need to make sure their exposure to these risks is understood and managed.

In September 2019, OFAC issued an ‘Advisory to the Maritime Petroleum Shipping Community1’ which reminded us, if we needed reminding, of the sanctions environment relating to Iran and the consequences of any breaches. It also outlines some “Deceptive Shipping Practices” to be aware of. These include:

Other nefarious methods, not included in OFAC’s advisory include:

The complexity of the commercial relationships, the reliance on old-fashioned paperwork and the stringent sanctions environment mean that banks need to take extra care to manage their risk.

Lessons can be learned by looking back on OFAC settlements relating to vessels:

The settlement agreed with Eagle Shipping International Limited2  early this year is an interesting case study in some of the incentives that might drive behaviour when it comes to negotiating shipping deals.

In June 2011, Eagle had loaded a cargo of 17,600 cubic metres of sand onto one of their ships through an agreement with a Singaporean company. The documentation provided by the company identified the shipper as Myawaddy – a specially designated national (SDN) on the OFAC list at that time – as the shipper and this raised a suspicion that the sand was of Burmese origin3.

The Singaporean Company, keen to progress the shipment to their buyer, provided a new bill of lading with an ‘alternate shipper’ of the sand. The Operations Manager of Eagle instructed the captain to sign the departure documentation if he was sure that the alternate shipper was the genuine shipper. However, the captain found other discrepancies in the documentation and refused to sign the paperwork, meaning that the ship could not depart.

What followed was a set of events including another set of revised paperwork, the crew’s passports being confiscated by local officials, more pressure being applied by the Singaporean company and an application to OFAC by Eagle for a licence to complete the transaction – which was denied. Nevertheless, on the basis of concerns about the safety of the crew, Eagle signed the paperwork and completed the shipment.

After this initial voyage, Eagle applied for another licence – also denied. However, the former Eagle COO, who had received OFAC’s licence denial, failed to pass this information on to anyone else in the organisation. Eagle proceeded with a further 40 sand voyages from Burma to Singapore.

Ultimately, Eagle was fined USD 1.15 million and required to improve their sanctions compliance measures. This example illustrates how different parties to a trade will have different incentives and how these may result in attempted sanctions evasion. It also shows how all parts of a firm must be aligned and consistent with their compliance actions. Various individuals at Eagle, at different times, appeared to try and do the right thing, but ultimately the company fell foul.

MID-SHIP Group LLC , a shipbroker and charter party agreement negotiator, were fined $871,837 in 2019 for transactions involving blocked vessels owned or controlled by the Islamic Republic of Iran Shipping Lines (IRISL), an OFAC specially designated entity4. One of the key factors of the transgressions was that although the name of the ‘performing vessel’ for one of the charter agreements had not been listed by OFAC at the time of the transaction, the IMO5 number was listed against another vessel name.

This shows how important it is to do comprehensive research on the vessels involved in the transaction before committing to it. In this case, the vessel had changed name, but could still be identified by its IMO number, so the possibility of a breach should have been spotted.

THE NEED FOR EFFECTIVE CONTROLS

FIs should ensure that they build a solid understanding of their exposure and their customers’ exposure to the risks explained in the OFAC advisory. With this in mind, there needs to be an effective controls environment that addresses these risks in line with the bank’s risk appetite.

The old mantra of People, Policy and Processes, Systems and Information provides a good framework when considering your controls environment.

It is essential that compliance teams, as well as the first line, have a really solid understanding of all the products on offer. Training should focus on the risks specific to each product and how bad actors could take advantage to circumvent the sanctions and anti-money laundering controls. The Eagle settlement above would be a good case study to include in training materials.

Compliance policies and procedures must be robust, consistent, well communicated and subjected to assurance to make sure they are working effectively.

One critical component is to ensure that a customer risk assessment builds a solid understanding of their business and determines whether the risk of doing business with them is acceptable. This should include the identification of the countries the customer operates in and what that means to the overall customer risk. For example, many banks will avoid – or take extra precaution with – any business involving high-risk countries and customers, over and above those on the OFAC SDN list. A detailed country risk index, comprised of a range of risk indicators, can either be developed internally or sourced externally.

FIs will also have to agree their position on transhipment – the transfer of goods from one vessel to another between origin and destination. How would you feel if you were financing goods that were transferred from one ship to another while docked in Bandar Abbas, Iran’s busiest port? The Bankers Association for Finance and Trade (BAFT) Working Group advised in 20176 that in some circumstances, this should not necessarily result in a sanctions violation, but not everyone would be happy defending that position. The Working Group goes so far as to suggest that “the tracking of vessel movements is not a necessary or even a helpful measure to detect and mitigate sanctions risks. While movement history may be indicative of some potential nexus to a sanctioned territory, movement to a territory or territorial waters should not, on its own, demonstrate that goods have been exported to or entered into commerce of a territory.”

Screening systems should be in place to sift out transactions and customers that might result in a sanctions breach. There is a vast range of systems out there, each with their own strengths and weaknesses. More and more regulators are insisting that FIs obtain independent assurance that their screening is effective and is aligned to their risk appetite. It is critical to tune and test a screening system to be able to find suspicious activity without producing too many false positives.

FIs should also consider the requirement for additional research tools. There are many tools and services available to help organisations find out where the ships have been, where they are heading and what’s happening in between.

The effectiveness of screening can only be as good as the quality of the data that is fed into the screening system. A full data quality assessment and remediation process is recommended to identify which data elements actually contribute to screening risk and to prioritise the remediation.

It is also key to ensure that list data is up to date and accurate and that it includes vessel names, IMO numbers and vessel owners where possible. Remember also that trades should be screened at key events during the life of the trade not just at setup. This will capture any changes to lists whilst the trade is in progress.

Trade finance is a complex area for many reasons and the risk of breaching sanctions on vessels only makes it trickier. Any FI involved in or thinking of getting involved in trade finance should take time to fully consider the risks outlined in this article and how they will build an effective control environment to mitigate those risks.

For more information on how we may assist you please contact us at SQA Consulting.