Quantifying Sanctions Risk in the UK

The amount of money, resources and time a company chooses to invest in sanctions screening is a risk-based decision based on their perception of their sanctions risk. For most firms, the likelihood of finding a sanctioned name in their customer base is probably slim – some have millions of customers and have rigorous on-boarding processes. Many UK-based financial services firms consider their customer base as low risk from a sanctions perspective. If, for example, you have only UK-based customers and you only take on corporate customers with businesses that match your risk appetite, then that is not an unreasonable argument.

The likelihood of finding a sanctioned name on your books might be low, but the impact – if it did happen – can be enormous. Regulator restrictions, huge fines, reputational damage, loss of banking licence…

For this article, we took a look at the individuals and companies on OFAC’s Specially Designated Nationals and Blocked Persons List[i] that had the United Kingdom noted as a possible address. We found 107 unique individuals and companies. By comparison, there were 826 linked to Iran, 814 to Colombia, 81 to Germany and 37 to Spain. Click here for a recent SQA article showing how these numbers have moved over time.

The map below shows how those 107 SDNs are spread across the UK. (There were 22 for which the only reference was ‘UK’.) 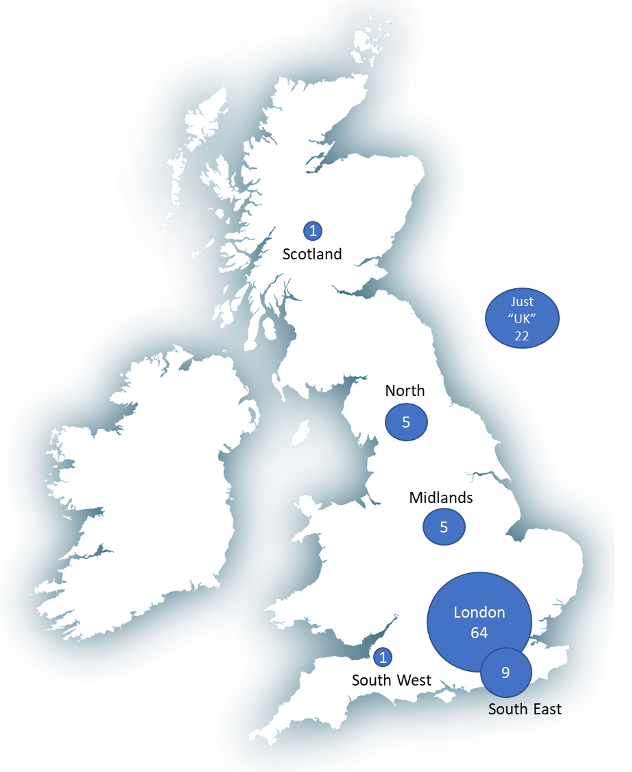 The UK SDNs have been listed under a variety of programmes: 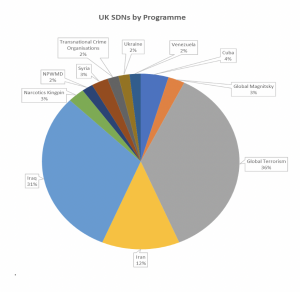 The 107 names were made up of 75 companies and 32 individuals. Just to pick out a few examples:

This shows that the sanctions risk of a UK customer base should probably not be considered as negligible. UK firms that don’t prioritise sanctions screening could be opening up themselves to more risk than they realise.

SQA Consulting can help companies ensure that their sanctions screening is effective and consistent with their risk appetite. For more information, please contact us.