Every language has its own idiosyncrasies regarding personal names, we have already covered Korean and Russian names in previous articles. We now turn our attention to Spanish names.

The reasons for covering Korean and Russian names in the current geo-political climate may be more obvious than for Spanish names, but Spanish names remain a significant risk, do present challenges for screening (both for effective and efficient screening), and financial institutions have a history of getting it wrong. If we put the locations of OFAC SDN Individuals on a starting grid, it would look like this: 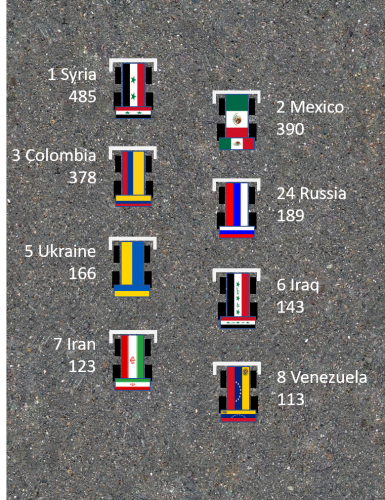 The SDNs located in Venezuela, Colombia, and Mexico cover 27% of all individuals with a specified location on the OFAC SDN list. The majority of these are for narcotics related programs implemented as part of the “war on drugs” a battle instigated by president Nixon and still being fought today.

The exposure of Spanish names to EU and other country sanctions is more limited.

The key difference in Spanish names from other personal naming conventions is the way two surnames are used formally, but only one used informally.

If we look at the Prime Ministers/Presidents of some Spanish speaking nations, we can see the difference between the formal and informal names:

Have a look at your favourite Spanish sports star on Wikipedia and you will see their full name.

Surnames do not normally get changed through marriage.

So some example good and bad matches would be:

Maria de Jesus GARCIA HERNANDEZ  ≠  María HERNANDEZ
No, where there is a single surname it should match the paternal surname.

Some other points worth noting for Spanish names are:

Note that Portuguese (and Brazilian) names do not work in the same way, in fact they work in the almost opposite way, however there are very few Portuguese personal names currently on the OFAC SDN list (although for PEPs screening …).

This has been a short article on Spanish names, but we do consider these names to be very important in screening. In our screening assessments fuzzy matches on Spanish names are our most highly weighted tests.

At SQA Consulting we can not only give you hints and tips on screening effectively and data management, we are leaders in measuring the effectiveness and efficiency of screening. Please contact us to find out more about this article, or download our brochure here.